Motorcyclist Drug Under A Truck And Survives

Thanks to http://GoMotorcycleCrash.com for a dramatic and heroic True Story of a group of Good Samaritans who helped rescue a Southern California Motorcyclist that was trapped under a moving Truck on the 1st day of this Motorcycle Safety Awareness Month.  As reported by #ABC7Eyewitness and CBS Los Angeles: a Motorcyclist was hit by a car while changing lanes on the eastbound 91 freeway, just west of the 71 in Corona, CA. Another driver, who thought he saw a bumper being drug beneath the vehicle, flagged down the truck driver so they could rescue the motorcyclist. Fortunately, the driver of the motorcycle received only minor injuries because he was wearing protective clothing and a quality helmet. 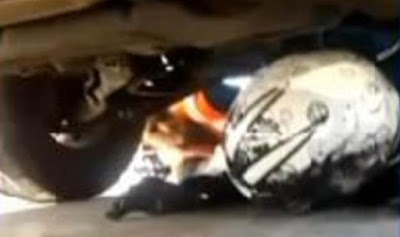 A motorcyclist was rescued after being trapped under a pickup truck in Corona, CA, May 1, 2015.
BYRON HOLEMAN/CBS LOS ANGELES
VIDEO: #DrugUnderATruck


CBS Los Angeles tracked down the man who shot the video.
"I walk up to the guy, I put one knee down, I can see he's kind of groggy, everybody gets out, we're trying to figure out how to help him out, do we lift the car up, do we get jacks?" said Byron Holeman, one of many who came to aid the cyclist.
CBS VIDEO EMBED
According to witnesses and Corona Fire Department Spokesman John DeYoe, the motorcyclist was trapped and drug under the red Ford F-150 truck at freeway speeds. Another witness and rescuer included a local firefighter, Andrew Hubbard, who got a jack and was able to help lift the truck off him with the help of some Good Samaritans. Incredibly, the man was pulled free and hospitalized with only minor abrasions, DeYoe said.
Holeman said once paramedics were called, he started recording the rescue scene, which he then posted to Facebook. As of Memorial Day May 25th, the viral Facebook video had been viewed more than 7,226,000 times.
**Warning, the following video may be disturbing for some to watch.**
FACEBOOK VIDEO EMBED

So I'm commuting home today in the famous 91 freeway traffic. I see a pick up truck east bound just past Green River dragging what I thought might be a bumper. I take a closer look and realize it is a human body underneath the truck.  #Abc7eyewitness
Posted by Byron Holeman on Friday, May 1, 2015

Amazingly, the man escaped the ordeal in Riverside County with only minor injuries, largely thanks to his protective gear. 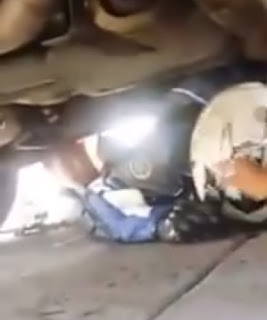 Screenshots from a video showing the rescue of a motorcyclist by a group of concerned citizens. Credit: Byron Holeman.
An ambulance arrived on the scene a short time later. The man, who was in full protective gear, suffered only minor injuries, but was taken to a local trauma center as a precaution. This story underscores the importance of staying alert while driving, and being extra careful to watch out for Motorcyclists. Thanks to the Good Samaritans and the Motorcyclist’s protective equipment for the positive conclusion to this serious event.
The Law offices of Mark A Doughty can be reached by calling 530-674-1440. Mark A Doughty has been practicing law in California since 1979. He has served the people of northern California and represented them without a fee (in accident cases) unless he recovers for them. For more information, please see http://GoLaw.com.
Sources: abc7, cbs los angeles, localnews7, facebook, patch, youtube
Related Tags: 91 Freway, Byron Holeman, Corona, Good Samaritans, Motorcycle, Rescue
Posted by Unknown at 11:05 PM No comments: