Happy Halloween, everyone!  As the holidays approach, we at GoLaw.com hope you have a fun and stay safe. Thank you to AAA, AccidentDataCenter.com and GoPersonalInjury.com for this month’s Driving Safety Article: Friends or phones: Distracted driving a factor in 6 out of 10 teen crashes

Friends or phones: Distracted driving a factor in 6 out of 10 teen crashes 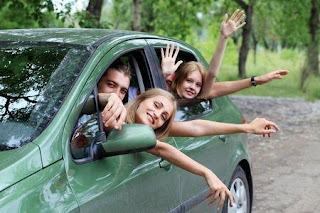 New idea for keeping teens safe: lock them up until they're 25.

OK, maybe that's not reasonable. But in a new report published by the AAA Foundation for Traffic Safety, analysis of nearly 1,700 videos finds that 6 out of 10 moderate-to-severe crashes with teen drivers are caused by a distraction—either friends or phones. The foundation calls it "the most comprehensive research ever" into distracted teen driving. Teens in the U.S. have the highest crash rate of any group, and the AAA report shows that distraction is a much bigger problem than previously realized. Forbes writes,

For the study, researchers analyzed the six seconds leading up to a crash in 1,691 videos of teen drivers taken from in-vehicle event recorders. The results showed that distraction was a factor in 58 percent of all crashes studied. Previous estimates by the National Highway Traffic Safety Administration (NHTSA) indicated that distraction is a factor in only 14 percent of all teen driver crashes, the group said.

This is a jump from 1 in 10 to 6 in 10, indicating a huge public safety issue. While most countries have a minimum driving age of 18, the U.S. minimum age remains at 16 (or 15 with learner's permit). While many states have enacted laws about how many teens can be in a car at once, this research indicates that more states may want to follow suit—or pursue stronger laws—in the future. The Insurance Institute for Highway Safety says that, on average, graduated licensing reduces teen crashes 10-30 percent, and they even have a calculator where you can determine how graduated teen driving laws could lower rates of teen fatalities in your state.

Motor vehicle crashes are the leading cause of death for teenagers in the U.S., and the AAA report is telling us that most of them may be preventable through tougher restrictions on teen driving. Will legislators listen?

New research by the AAA Foundation for Traffic Safety into distraction and teen crashes. (Courtesy AAA)

A new study exposes a disturbing trend among teen drivers. AAA reports distraction was a factor in nearly six of 10 moderate or severe accidents involving teenagers. Car crashes are the leading cause of death for American teens. Wyatt Andrews reports from Washington with the sobering statistics.

Posted by Unknown at 2:26 PM No comments: