It’s time for another one of our Driving Safety Tips from your friends at GoLaw.com

Did you know that your vehicle’s Trailer Hitch has the ability to Increase the Risks of Injury to you and your occupants? The impact of a Rear End Vehicle Collision can cause painful injuries including soft tissue damage, and can be much worse on occupants if a trailer hitch is installed since it is attached directly to the frame.  Most modern vehicles are designed to protect their passengers from the impact energy of a Car Crash with "crumple zone” safety features.  However, when the hitch is inserted into the receiver so the "g forces” (Forces of Gravity increase the injuries) are transferred directly to the frame of the vehicle and the occupants bodies, there is the possibility for greater trauma since the impact could not be absorbed in the crush zones. For this same reason, it is typical to see the Property Damage be less severe with a lower cost to repair than it would have been had no hitch and ball been installed in the receiver.

As reported in the National Safety Commission Alert: “the most frequent vehicle accident (in the United States) is the rear end collision” and “a vehicle equipped with a receiver hitch (tow bar) increases the risk of whiplash by 22% if it is hit in the rear”.  According to the article: “A receiver hitch completely changes the crash dynamics.” 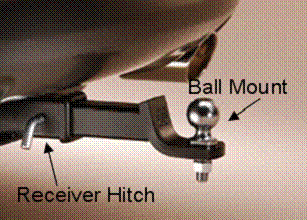 Interesting Rear End Vehicle Collision facts:
The Law offices of Mark A Doughty can be reached by calling 530-674-1440. Mark A Doughty has been practicing law in California since 1979. He has served the people of northern California and represented them without a fee (in accident cases) unless he recovers for them. For more information, please see http://GoLaw.com.
Posted by Unknown at 11:52 AM